I recently returned from my third and final trip to Nicaragua with Random Acts. While gathering the required donations was never exactly easy and the trips themselves were emotional rollercoaster rides, I have no regrets. I have made some wonderful, inspiring friends that I hope to have in my life until I draw my last breath. These people have worked tirelessly year after year for this project and I am privileged to know them. We left Nicaragua this time knowing that these oh-so-deserving students have a beautiful building in which to equip themselves for the future. Having a state-of-the-art facility that is all their own lets them know that they are valuable and their intelligence and talents are respected and needed. I’m not a big crier. But listening to Margaret M. Gullette, one of the school’s founders, describe what this building means to the students…no, I didn’t cry. It was dust. A bit of dust flew in my eye. On my kitchen wall hangs a plaque I made containing bits of bamboo signed by the incomparable Austin Drill, who tirelessly explained bamboo and feces and always made it interesting. On my dining room wall hangs a sketch of the building adorned with bits of the blue and white ribbons that were cut during this trip’s grand opening ceremonies and a small Polaroid photo of the school. (Thank you, Virginia!) I want to keep these things close to me.

One thing of my favorite elements of every trip was actually working on the school itself. Granted, I am well aware that the construction workers could have done anything I did much faster and much better. Still, it was a joy to be sweaty, covered in cement, and fumbling along next to these workers who were so sweet, so gracious, and so quick to smile. I’ve cut chicken wire for the walls and sent one of the guys into a panic when the wire went through my gloves. It missed my skin completely, but you would have thought I had suffered a near fatal wound as he anxiously squeezed my finger to make sure no blood came out. I remember on the first trip when scaffolding was being put up and I had to push in one metal side until it matched with a protruding peg on another side. One worker said to the other, “No puede.” (She can’t.) Nothing short of a coronary was going to stop me bringing those two sides together at that point. I did it and then with a smile said, “No puede.” The one worker hit the embarrassed speaker playfully like “Ha! Dude, she totally understood you!” I’ve laid tile floors, sifted soil, carried concrete, cleaned metal beams, hammered bamboo sheets on latrine walls while perched on scaffolding, set cord wood and bottles in concrete to form walls, sanded and stained bamboo, painted walls, and loved every minute of it. I lie. I hated cleaning bricks, but other than that, I loved it. I’ve learned so much and I am so thankful for having had these experiences. It makes me happy to think that for decades to come, a tiny bit of me will be there in that building. The Random Acts group also attended a first rate theatrical performance by the children and youth from the Barrio Planta Project (BPP). BPP has always been a stop during Random Acts trips and it is always fun. It was an evening of classics such as Los Tres Cerditos (The Three Little Pigs). The wolf burning his tail trying to slide down the chimney into the brick house was a crowd-pleaser. Sometimes these classic stories had a BPP twist to them. Caperucita Roja involved three Red Riding Hoods getting the best of three wolves, who then were dismissively kicked with the diminutive foot of the tiniest, cutest ladybug you’ve ever seen. I believe that last bit may have been an improv by the ladybug. Pizza and soda followed the performance and there was an impromptu dance party to Pharrell’s Happy. BPP is a joyful place.

On this trip, we stayed in a big, beautiful wooden house that would not be out of place in Savannah, Georgia. The porches and backyard allowed us to spend time together as a group. Don’t get me wrong. The Villas that we stayed in the last two trips were wonderful in their own way. When I think of one of my favorite places in the world, I picture sitting on the Villa porch at the end of the day looking down on the lights of San Juan del Sur deep in conversation with people I’ve grown to love. The whole group being all together on this trip though allowed us to more opportunity for everyone to hang out together. The house itself had a personality, warm and comfortable with just the proper amount of a haunting. Yeh, that was a thing.

We ate well. I can’t get enough of traditional Nicaragua food and, while I’ll try to make gallo pinto, I’m not sure it will be the same. The tiny comedor we stopped at for lunch after working in the village makes a delicious fish, which sadly does not come sin rostro (without a face). The small establishment across the street provided bagels with hummus whenever I needed to bring my lunch and I finally got to try the Bagel with Cheese Cream and Mermaid that was calling to me all trip. Mermaids, by the way, taste like marmalade, which is probably why they are endangered.

Thanks to Random Acts for reintroducing me to one of the long time loves of my life, Nicaragua. I was there in the 80’s and I have no idea why it took me so long to go back. But now that I have, I’m not going to let it go again. Hasta la proxima, Nicaragua! 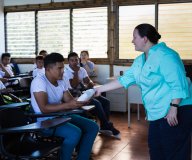 Written by Random Acts staff member Jennifer Willis-Rivera: As a professor in the United States, I walk into a classroom almost every day. The same was true on...