Those of you who watched our 2015 trip video may remember Jordan Marin, who works with our general contractor Austin Drill on the construction of the campus and also attends the Free High School on Saturdays. (If you missed the video, we’re making it easy for you to watch it below!)

Jordan started out life as a poor farmer’s son, and for a long time he seemed set to follow in his father’s footsteps. After finishing fourth grade at age 13, he was forced to leave school so that he could work — first with his father in their fields north of San Juan del Sur, then as a sugar cane cutter when he would rise at 2 am every day and work until 7 pm, after which he would be too exhausted to do anything but eat, sleep, and start all over again at 2 am. Reflecting on those days, he can only say, “I lost four years of my life.”

Unwilling to spend the rest of his years like that, Jordan decided to move closer to San Juan del Sur to find construction work and pursue his life-long dream of studying. That decision turned his life around. Within a year he learned masonry. He also enrolled in a night school in Rivas and finished both fifth and sixth grades in one year. His teacher must have seen promise in him, because when the weather made roads impassible, she helped him over the telephone with the material he missed.

Austin and Michelle Drill moved to San Juan del Sur seven years ago and started Casa de Tierra, which specializes in green construction, and they hired Jordan for his masonry skills. He also became Austin’s Spanish teacher, and in return Austin taught Jordan English as well as many green building techniques. “I feel really happy with my skills,” he says. “I can do everything: concrete, earth bags, straw bale, bamboo, stucco.” Jordan has Saturdays off and he thought, “I should do something with that extra day.” So he started at the Free High School. Already past his mid 20s at that point, he was worried about being too old, but a professor assured him it would be okay. He has since found the school to be life-transforming. “The way I spoke was rough,” he explains. “I learned how to express myself. I see a future.”

Now Jordan is 29 and in the ninth grade at the Free High School — his third year. For the last two years he has been the first in his class. “People work, some of them on Saturdays, and can’t study. Women who work and have children also can’t study. People have no choices. But sometimes they think they have no choices when they do. I found room [in my life] to study.”

On weekdays, he still works with Austin at Casa de Tierra. Jordan is the foreman on the Free High School construction project, and he continuously pours his sweat and love into building a campus for students like himself. He saved himself from a lifetime of poverty through education, found a good job, and lives comfortably with his partner and 4-year-old son in a beautiful house he helped build. With Random Acts and all of you backing him and the Free High School, Jordan is now able to help give other students the opportunity to turn their lives around as well. 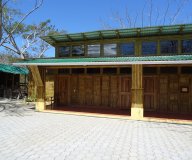